You lie awake at night and cannot fall asleep? We put twelve myths under the microscope so that you can sleep better in the end. Good night!

“I can still sleep when I’m dead.” With this quote from the director Rainer Werner Fassbinder, some people emphasize that they could do much more productive things than lounging unconscious under cozy blankets for hours.

However, Fassbinder died at 37, so maybe he should have paid a little more attention to his night’s rest. Because sleep is anything but unproductive. One of the nightly jobs is to consolidate what has been learned and learned from the day in the long-term memory, to produce growth hormones for cell renewal and wound healing and to heat up the immune system to hunt viruses and bacteria.

“Contrary to what many people think, the body’s energy consumption during sleep is almost as high as during the day – the difference is exactly the equivalent of a slice of toast,” says Professor Jürgen Zulley, head of the Sleep Medicine Center at the University of Regensburg. Let an expert tell you about sleep – so that you can distinguish fairy tales from real bedtime stories.

Correct! However, only if you really mean the “middle of the night” by this – which is closer to around 3 o’clock.

“This is the real witching hour of the biorhythm,” says Zulley. Those who then have to be awake are restless, frozen and in a bad mood to the point of sadness – one of the reasons why you should never wallow in problems at night. In the particularly restful deep sleep phases, you almost only dive into the first 4 hours of sleep and before biological midnight. You will collect most of the deep sleep when you regularly go to bed at 11 p.m. “The body can catch up on missed deep sleep the following night,” says Zulley. So take it easy! 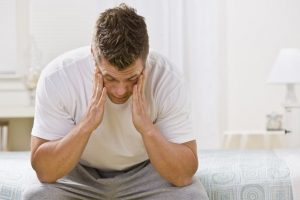 “Who is tired and weak in the morning and slept badly at night?”

Not correct! Often the alarm clock just went off at the wrong time. “In fact, the state of awakening does not allow any conclusions to be drawn about the quality of sleep,” explains Zulley.

This is because the night’s rest is divided into stages in which you sleep at different depths. Those who are torn from deep sleep are completely off the trail, while getting up is easy when they are naturally on the threshold of awakening. Neither of these says anything about whether you have already recharged enough energy for the next day. Sleep researchers therefore assess whether someone sleeps too little or even suffers from a sleep disorder based on whether they are fresh most of the day or nod off immediately when it gets boring or comfortable. If you want to get out of bed more easily in the morning, you should let the alarm go off in a light sleep phase.

You can calculate it as follows: The 1st cycle takes about 60 minutes, the following about 90 minutes. Added to this is the time it takes to fall asleep, most of them around 15 minutes. The optimal wake-up times are 5:45, 7:15 and 8:45 hours after “lights off”.

Sleep myth 3: A bit of sleep

“A couple of hours every night made everyone fresh”

Not correct! Ignore people like Thomas Edison, inventor of the lightbulb, who boast of getting by on 4 hours of sleep a night. Because these people often supplement their sleep with various naps during the day and thus achieve completely normal sleep amounts overall. Even if not, how much sleep you need to be relaxed and stay healthy in the long term is largely genetically determined.

“Most people need 7 to 8 hours of sleep,” says Zulley. You can find your own optimum by going to bed at the same time for a while (not too late!) And getting up in the morning as soon as you are awake. Make a note of the hours you slept, then after a while you will recognize your personal average.

Not correct! “Not sleeping through the night is not a sleep disorder; it is completely normal,” says Zulley. Anyone who sleeps 7 hours wakes up about 28 times a night, but in most cases they don’t remember because they fall asleep again immediately.

Sleep research has shown that you only become aware of the waking phase (and stay in your memory) if it lasts longer than 3 minutes. However, according to Zulley, conscious awakening only becomes problematic if the person concerned is annoyed or worried about it: “In this case, stress hormones are released that actually rob you of sleep.”

Those who cannot fall asleep again should check whether they are still physically relaxed. Then it is advisable to lie still and concentrate on your breath. Consciously breathe in deeply and slowly and then exhale even more slowly. If, on the other hand, you are only tossing restlessly from side to side, then you’d better get up. Make sure that your body does not get cold and do some quiet activity that arouses positive thoughts in you and that you can stop at any time when the heaviness of bed returns. 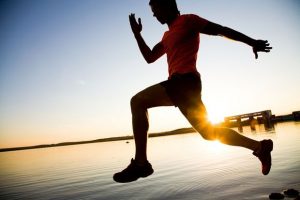 “If you go to sport late in the evening, do you fall asleep immediately afterwards”

Not correct! Pushing yourself to the limit of your performance doesn’t make you bed heavy, but increases the production of the stress hormone cortisol – and that keeps you awake for the time being.

You should therefore be through with highly demanding training units by the afternoon at the latest. “However, the assumption that late exercise generally disrupts sleep is outdated,” says Zulley, recommending regular, calm exercise.

If you are tied to late training times, you can turn the shower into a sleep ritual afterwards: the warmth and the massaging water jet help you relax. You have to try whether a sauna or a hot bath have the same effect, some react rather exuberantly.

Not correct! Sure, you’ll fall asleep faster, but the sleep structure gets mixed up and prevents the night from becoming really restful. The important deep sleep in particular suffers.

In addition, the relaxation created by the alcohol also loosens the tissue in the throat: “Even 1 glass of beer significantly increases the likelihood of snoring,” explains Zulley. This disturbs sleep for several reasons: You do not get enough air from the slack tissue and you wake up more often from your own noise level. Or because your partner is constantly ramming her elbow in your side.

“Lie on your back asleep, the sleeper likes to saw”

Those who lie on their back are more likely to snore.

The likelihood that slack throat tissue will obstruct airflow is greater in the supine position than in other positions. Sometimes, however, a higher pillow helps, in more severe cases you can lie down in bed with a so-called supine position prevention vest (from the medical supply store). “Looks like Quasimodo, but it works,” says Zulley.

Equipment with which the nostrils are to be opened wider are useless. According to Zulley, many operations to clear the airways are often unsuccessful, so you should only consider them if the recommendation is made by an ear, nose and throat doctor who is experienced in snoring. They are available, for example, in specialized sleep laboratories; the addresses can be obtained from the German Academy for Health and Sleep (DAGS) on tel. 09 41/9 42 82 71.

Incidentally, one of the most effective measures against snoring is to permanently rid yourself of extra pounds. 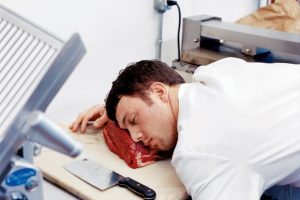 “If you are tired after Vespers, you probably eat the wrong thing at lunchtime”

Not correct! Eating too rich and too high in carbohydrates may aggravate the midday slump, but it is not to blame. The cause lies in the biorhythm, so it is innate.

Give in to the body’s natural need for rest instead of struggling with fatigue. A nap is rewarded with a significantly higher performance curve in the afternoon. “After a nap, performance is 35 percent greater,” says sleep researcher Zulley.

Caution: If you rest too long, you will fall into deep sleep and will not get going well afterwards! To prevent this from happening, set an alarm clock and close your eyes for a maximum of 30 minutes. This is relaxing even when you don’t fall asleep.

“If you often have to go to the bathroom at night, maybe it’s because of the apnea”

Correct! If you regularly have to go to the toilet more than twice a night, this can be a sign of sleep apnea, i.e. nocturnal breathing pauses.

You won’t suffocate, but they are life-threatening in the long run. Because your body is not getting enough oxygen and is constantly alarmed. That’s why you often wake up briefly to gasp – possibly several hundred times a night.

The lead tiredness on the following day permanently kills all zest for life, drastically increases the risk of accidents of all kinds and stresses the cardiovascular system. Such pauses in breathing usually, but not always, occur together with heavy snoring. The pressure on the bladder at night can be the only sign warning you of the danger. It occurs because the falling oxygen levels in the body increase blood pressure. To reduce this, the kidney is stimulated to excrete more fluid – the bladder fills.

“Sleepwalking is a rumor, because whoever sleeps does not sin”

Not correct! There are sleep disorders in which those affected – men only – live out dreams and do crazy things in their sleep without even knowing it the next day.

In doing so, they not only endanger themselves, they can also hurt their partner, for example if they are attacked in a dream and defend themselves. There is also the more common sleepwalking, in which those affected are active in deep sleep.

Where are the disturbances coming from? The sleep of the brain and the rest of the body are normally controlled and synchronized separately. If it works, you are largely paralyzed in the dream phase; occasional twitching or speaking is normal. The fact that the coordination of body and brain is sometimes more seriously disturbed can have various causes: hereditary predisposition, stress or permanent confusion of biological rhythms, such as through shift work. In addition, fever, mental illness, alcohol and other drugs promote so-called somnambulism.

The proverbial sleepwalking security is a myth: Time and again, people in deep sleep fall out of the windows they thought were doors. 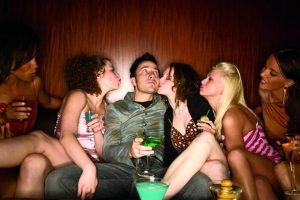 “Do you want to party in the evening, sleep well, stay longer”

Correct! And that by reducing a possible sleep deficit. It would be ideal to get enough sleep the week before a long night. On the day of the event, a midday nap will reduce pent-up fatigue, and you can beat yourself on the ear even in the early evening.

The naps are only relaxing, however, if you observe the sleep architecture mentioned above: Either you snooze for a maximum of 30 minutes or you take a break of 3 hours, in which you then manage 2 cycles including deep sleep.

“If you don’t wake up in the morning, only one thing helps: bright light!”

Spending an hour outside in the morning is an unmatched pick-me-up. If you have to go in the dark, you can sit in front of a light therapy device (e.g. above). Two hours before 2500 lux wake you up, at 10,000 lux 30 minutes are enough. The lamps also help to endure night shifts better. But be careful: it never replaces a good night’s sleep!